Four years ago, a Liberal government gave Canadians the tax break they deserve — putting hundreds of dollars back into the pockets of the middle class and the people working hard to join it by cutting their taxes and asking the wealthiest one per cent of Canadians to pay a little more.

The impact of hundreds — and in some cases, thousands — of extra room in a family’s yearly budget made a real difference. We invested in Canadians, and in turn they invested in their communities — creating more than a million new jobs, and plunging Canada’s unemployment and poverty rates to record lows.

Today, Canada’s economy continues to grow. Yet, once again, the middle class Canadians responsible for that momentum aren’t seeing the full benefits of that growth in their day-to-day lives because of the rising costs of living. At the same time, corporate profits have continued to outpace wages.

A re-elected Liberal government will tip the scales by cutting taxes for the middle class and the people
working hard to join it — saving the average family nearly $600 per year.

To help every Canadian cover their most basic needs, no tax is collected on a certain amount someone earns. This is known as the Basic Personal Amount (BPA), and for 2019 it represents the first $12,069 earned.

A re-elected Liberal government will put more money in the pockets of Canadians who need it most:

This would be phased in as follows:

Scheer’s tax cut for the wealthy

Under our plan, Canada’s wealthiest one per cent will not benefit at all from this tax cut. We will start to wind-down the benefits of the increased BPA for individuals making more than $147,667 a year2 — and completely cut off any benefit for those making more than $210,371 a year. Those who earn income higher than $210,371 a year will receive the current BPA, which continues to rise with inflation. No Canadian will be worse off.

Our plan increases the amount of income that is tax-free, raising it to $15,000, and phasing it out in a progressive way so the top one percent don’t get any additional benefit.

This lowers taxes the most for people who make less, helps the middle class, and ensures that the wealthy don’t get an extra hand up. 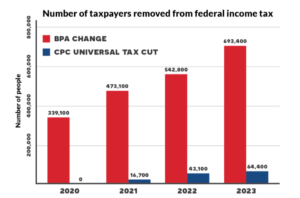 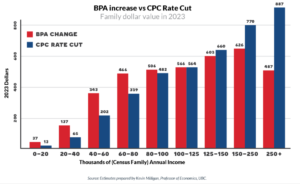 We will pay for this middle class tax cut through a series of measures that make our tax system fairer
for Canadians. More details will be released in the coming weeks.